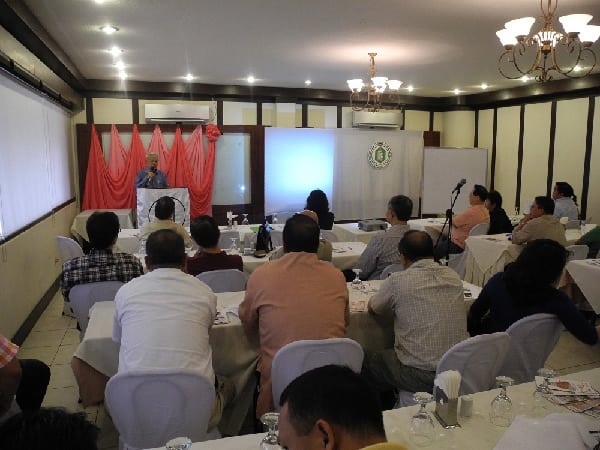 RDC-10 Co-Chair Arsenio L. Sebastian III presides over the Laguindingan Airport stakeholders meeting Feb. 15 at a local hotel. Those present signed a manifesto to Pres. Aquino asking for the deferment of DOTC’s planned April 30, 2013 soft opening over safety concerns and the adverse effects the cancellation of night flights would have on Northern Mindanao’s economy. (photo by Mike Banos)

CAGAYAN DE ORO CITY – Stakeholders from Northern Mindanao have issued a strongly worded manifesto asking the Department of Transportation and Communications to defer the planned ‘soft opening’ of the Laguindingan Airport in Misamis Oriental scheduled for April 30, 2013.

“We are concerned this will compromise the safety of the airline commuters using this airport and adversely affect the economy of the region due to the cancellation of night flights,” said Arsenio L. Sebastian III, private sector co-chair of the Regional Development Council for Region X (RDC-X).

Laguindingan Airport is situated some 46 kilometers southwest of Cagayan de Oro and would serve Northern Mindanao and the Lanao areas. With a total area of 417 hectares, it currently has a 2,100 meter (6,888 ft.) concrete runway capable of accommodating medium wide body aircraft such as the Airbus A320 on a 24/7 basis.

The Civil Aviation Authority of the Philippines (CAAP) charged with the operations of the country’s domestic airports said in a letter dated December 12, 2012 Laguindingan airport would be operated using Visual Flight Rules (VFR) pending the commissioning of air navigation equipment scheduled for completion by March 2014.

If the April 30, 2013 opening pushes through as scheduled, CAAP Director General William K. Hotchkiss III said domestic airline flights will only be permitted up to 3:00PM which would result in up to 69 percent drops in passenger and cargo volume, said Marlon G. Libot, president of the Communications Link for Emergency Assistance Network, Inc. (CLEAN) said in a Feb. 15, 2013 presentation to the stakeholders.

“It is not only air and navigational safety that will limit the use of Laguindingan but the notable lack of road and transport infrastructure especially for passengers coming from Cagayan de Oro, Bukidnon, Misamis Oriental and other provinces,” noted former Oro Chamber President Elpidio M. Paras. “Our vital road artery to the west from Bulua is hampered by a narrow corridor cluttered with roadside markets, illegal vendors, tricycles and other not-so-roadworthy contraptions, parked container vans and large vehicles.”

Paras said the coastal highway being built to relieve traffic congestion from the city proper of Cagayan de Oro in the east to the west crossing over the Iponan River and exiting at Opol is not expected to be finished in another year’s time due to budget constraints.

“Without a faster way to bring people to Laguindingan the advantage of Cagayan de Oro and its environs to the larger markets of Luzon and the Visayas will be negated. What is the use of jet travel from Laguindingan to NAIA which only takes 75 minutes when it takes someone from the opportunity rich provinces of Misamis Oriental and Bukidnon at least 3-4 hours to get to the new location?” he said. “The idea of developing Cagayan de Oro into the logistics hub of Mindanao will be a foregone conclusion if a premature opening of Laguindingan will just cause tons of lost opportunity.”

The DOTC wants to open Laguindingan to free up the Lumbia Airport for the transfer of the Philippine Air Force’s 15th Strike Wing now based in Sangley Point, Cavite.

General aviation now based in the Ninoy Aquino International Airport (NAIA) would next be moved to Sangley Point to ease congestion at the country’s premier airport by freeing up 44 hectares of NAIA now occupied by air charter, air cargo, aviation training, aircraft maintenance, and corporate flight operations.

The Aquino administration wants to decongest the NAIA which has been experiencing heavy aviation traffic due to the boom in the domestic airline industry brought by the democratization of air travel by budget airlines. Already, fish runs (flights by piston powered aircraft which transport marine products from the provinces to export markets) have been moved to Sangley since May.